Maintaining credibility can be difficult because the strategy is so obviously devious and paradoxically often it is the very opposite of the values that the new company is proposing in the new culture. This cynical culture change strategy believes that money is the best persuader. The person who controls the purse strings can buy or change anything. Everyone has a price. A serious increase or decrease in money will change behaviour which reflects the values of the new culture if sufficiently incentivised.

This is the approach that assumes people act more or less logically, but that their logic is based on entirely economic motives. The strategy also ignores emotional issues and all questions besides bottom-line profit. It too often is a strategy at odds with the new desirable cultural values of the organisation. The academic strategy assumes that if you present people with enough information and the correct facts, they will accept the need to change and how to do it.

The academic strategist commissions studies and reports from employees, experts and consultants. Although such strategists are happy to share their findings, it is difficult to mobilise energy and resources after the analysis phase. Also most managers do not really know what they should do, to whom, how or when. They often feel left out and ignored by the consultant academic. This technocratic approach assumes that, if the physical nature of a job is changed, enough people will be forced to change.

It is a method of re-engineering. Such change can also break up happy and efficient teams. 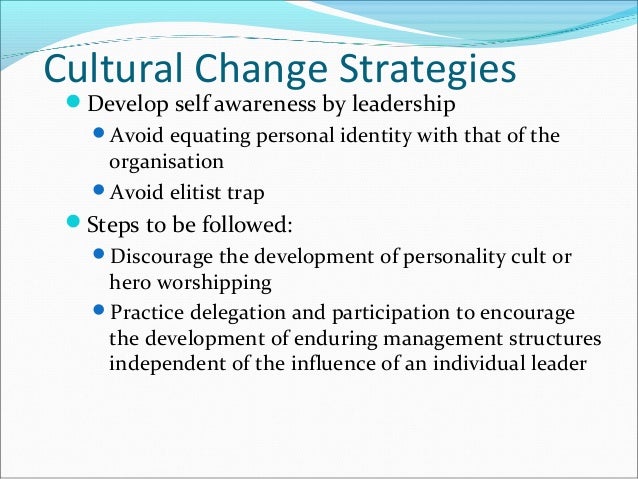 The military strategy is reliant on brute force. Physical strength and agility are required. But the change-enforcer cannot relax, in case the imposed change disappears. Furthermore, force is met by force and the result is ever-escalating violence. It only ever works when organisations are in real crisis seriously struggling to survive. This strategy believes that, if you can arouse and then mobilise anger in people to confront the problem, they will change. This approach encourages people to confront problems they would prefer not to address, but tends to focus too much on the problem and not on the solution.

Anger and conflict tend to polarise people and can cause a backlash. Culture-change strategists divide on a number of issues. Should you attempt to change the attitudes, beliefs and values or more simply the work-related behaviours of people? Should you use carrot and stick reward and punishment or just one or the other for most effect?

Should one start the change process at the top or the bottom in organisations? Certainly the literature and case studies give some answers to these dilemmas.


It is probably quicker and easier to change actual behaviour than beliefs, so target what people do rather than what they think. Carrots work better than sticks Young people are often easier or and more happy to change: so start at the bottom.

And never engineer a crisis. That will backfire. Oh and yes, real culture change is slow, different and requires living, not just talking — a new work style with all the consistent values and behaviours to match it. How would employees propose new ideas or evaluate one another? And how would employees react when they actually saw colleagues doing things differently? This is what Aetna did. It was also the approach taken by a national retailer that was looking to build a culture with a strong customer focus.

A group of senior executives interviewed them and isolated a set of crucial motivating behaviors, such as role-modeling good customer service. Store managers received training in the behaviors, which were also translated into specific tactics, such as ways to greet customers entering the store. The stores that have introduced the new behaviors are already beginning to see results, including improved same-store sales in key product areas and fewer customer complaints. The behaviors you focus on can be small, as long as they are widely recognized and likely to be emulated.

Consider the response one company had to the discovery that a major source of employee frustration was its performance-review process. The company used a degree evaluation mechanism, but employees were often unpleasantly surprised by the results.


So management introduced a simple behavior: asking people who were providing input whether they had ever given the feedback to the person being reviewed. As a result of this straightforward question, colleagues began to share constructive criticisms with one another more often, resulting in fewer demotivating surprises and a better dialogue about performance. When a few key behaviors are emphasized heavily, employees will often develop additional ways to reinforce them. As GM was emerging from bankruptcy, the company decided to spur innovation by placing a renewed emphasis on risk taking and the open exchange of ideas.

The practice soon began to spread.

If you can find ways to demonstrate the relevance of the original values and share stories that illustrate why people believe in them, they can still serve your company well. One of the best-known, and yet most misunderstood, examples of cultural backsliding took place at the Arthur Andersen accounting firm. With practices in more than 30 countries, it was once the envy of professional service firms.

Then in indictments during the Enron investigation forced Andersen into bankruptcy. At the time, many believed that a single client relationship had brought the firm down for largely legal or regulatory reasons. In fact, its fall stemmed from a creeping cultural erosion that had begun decades before the Enron debacle. At least that was the conclusion of analyst and journalist Charles Ellis, who studied the Andersen failure in depth and described it in an unpublished manuscript, What It Takes. The cultural deterioration also made it easier to ignore many warning signs, including the bankruptcy of Four Seasons Nursing Centers of America, in which the founder pleaded guilty to securities fraud and Andersen, as the auditor, was indicted.

The survey revealed a number of serious cultural challenges, including passive-aggressive behavior, inconclusive decision making, and pervasive organizational silos. But it also showed that staff members were unusually willing to commit time and effort toward the strategy; they really wanted to help.

This enormous strength had been largely untapped. That realization helped executives rethink how they communicated the strategy, and more important, how they interacted with employees to support the new behaviors. Another way to harness the cultural elements you want to support is by acknowledging them. Rowe, I really appreciate your taking the time to explain your new strategy. Can you tell me what it means for someone like me? Not an easy question. Why had that concept hit such a nerve? Aetna had always had a strong record of responding to natural disasters including the Great Chicago Fire of and the San Francisco earthquake.

Its employees were also proud of the many famous people—movie stars, astronauts, sports heroes, and other public figures—that the company insured.

It was only as a result of a strong managed-care movement that emerged in the s and s that Aetna had gained a reputation as a stingy, recalcitrant company. Employees stopped feeling good about their association with it. Another strength companies can leverage is the employees who are already aligned with their strategy and desired culture. If they look hard enough, most firms will find they already have pockets of people who practice the behaviors they desire.

In our experience, most corporate leaders favor formal, rational moves and neglect the informal, more emotional side of the organization. They adjust reporting lines, decision rights, processes, and IT systems at the outset but overlook informal mechanisms, such as networking, communities of interest, ad hoc conversations, and peer interactions. Google is a good example of a company that makes the most of its informal organization.

A senior leader we interviewed there compared the company to universities that plan out paved walkways when they expand their campuses. Whether formal or informal, interventions should do two things: reach people at an emotional level invoking altruism, pride, and how they feel about the work itself and tap rational self-interest providing money, position, and external recognition to those who come on board. At Aetna, Rowe explicitly sought out informal interactions with employees.

These included social visits, ad hoc meetings, impromptu telephone discussions, and e-mail exchanges. He and Williams focused on getting cross-sections of people to reflect on how they were feeling and on identifying their sources of anxiety and concern. Rowe began interacting with a cadre of about 25 influencers and within a few months expanded the group to include close to These discussions not only gave him insights about the staff but created a rapport between him and a respected group that disseminated his message both formally and informally.

What is happening with less obvious indicators, such as local sales improvements or decreases in customer complaints? Have enough people at multiple levels started to exhibit the few behaviors that matter most? For example, if customer relationships are crucial, do managers update the CRM database on a regular basis? Have specific intervention milestones been reached? For example, has a new policy successfully been implemented? Are people living up to their commitments to key account targets?

Are key cultural attitudes moving in the right direction, as indicated by the results of employee surveys? This last area is usually the slowest to show improvement. Most people will shift their thinking only after new behaviors have led to results that matter—and thereby been validated. When designing cultural metrics, remember that you get what you measure. An overemphasis on quarterly sales results, for example, can trigger inappropriate pressure on valued customer relationships.

Similarly, focusing on retention metrics as an indication of overall engagement and job satisfaction may not be as useful—or as important—as what happens to retention of top performers once a cultural initiative gets under way. Companies should also use their tracking efforts to remind people of their commitment.

Some organizations send out a five- or question survey every other week, asking how often particular behaviors have been exhibited. These surveys serve as good a basis for dialogue and act as a simple reinforcement mechanism. 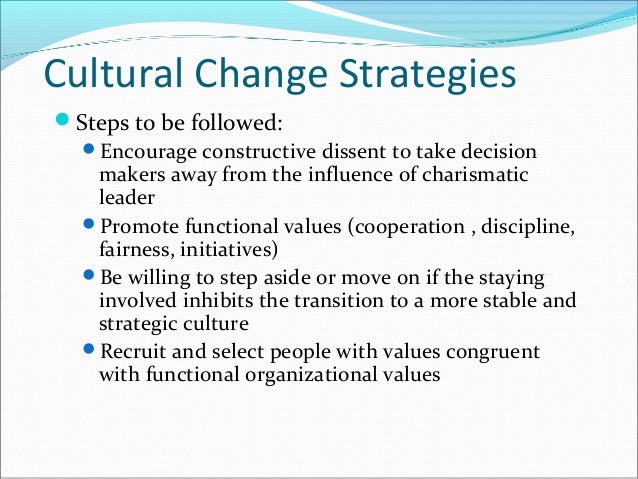 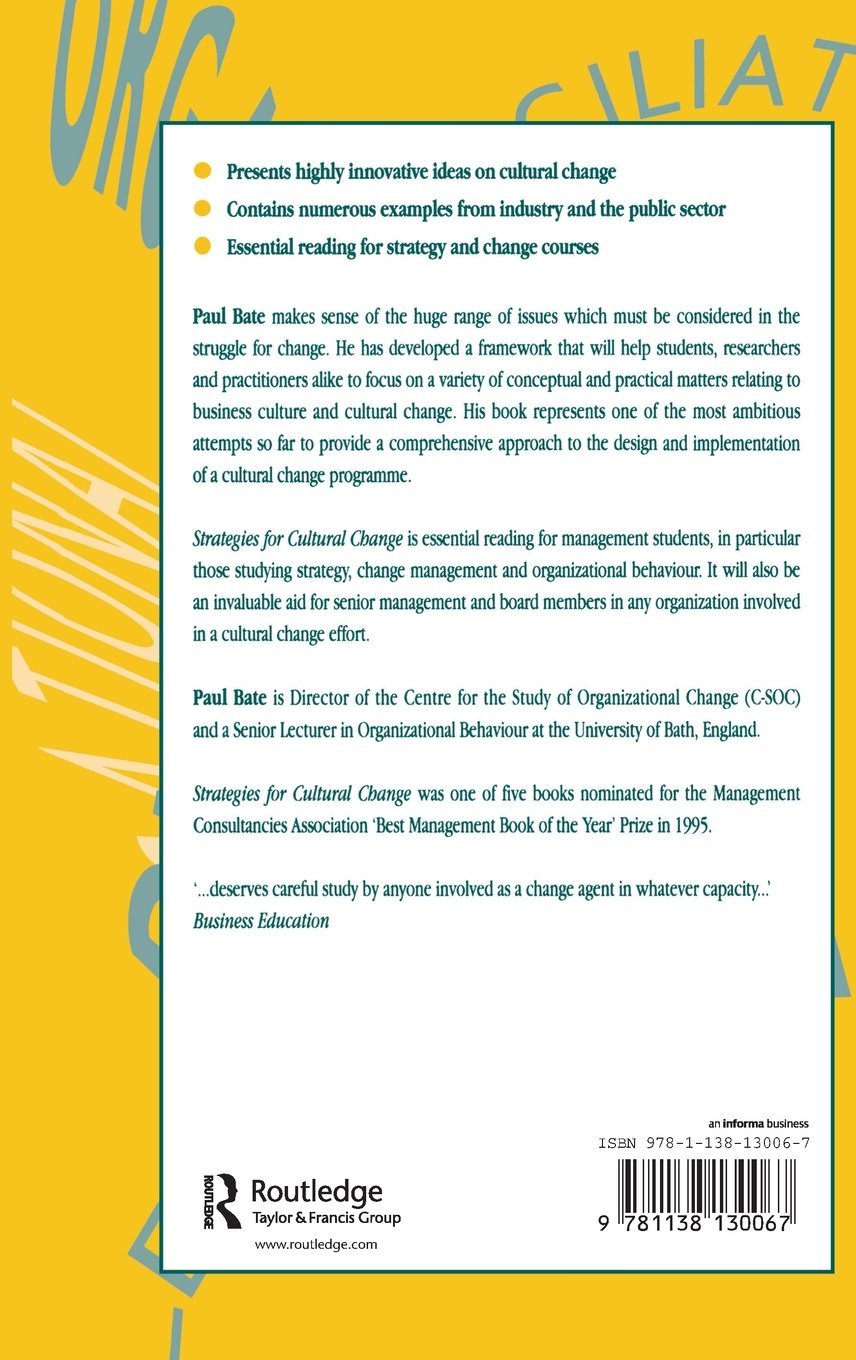 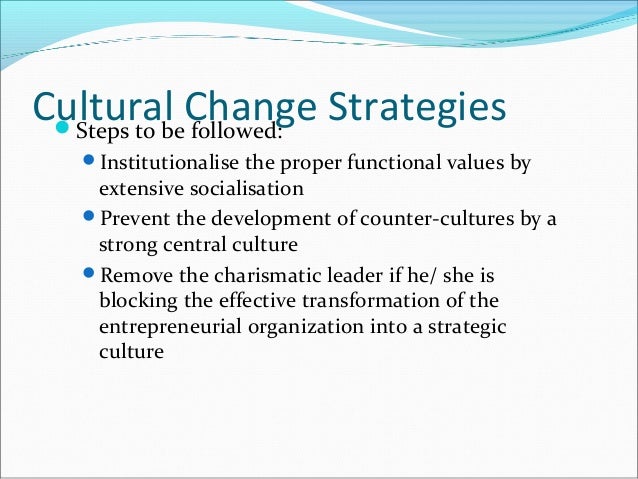