A large-scale survey of the post-World War II baby-boom generation reveals high levels of fluidity, of people moving in and out of religious groups and of frequent changes in beliefs and practices. The revelation that the First Lady was using visualization techniques and guided meditations in her imaginary conversations in the White House caught the immediate attention of various religious constituencies, who responded rather predictably: Christian fundamentalists took shots at New Agers calling them pagan and irreligious.

And New Agers fired back calling the fundamentalists rigid and closed-minded. Polls taken in the week following the news report found that few Americans actually thought the behavior of the First Lady was all that strange; public opinion of her hardly changed.


Some people rushed to her defense saying that the First Lady was a committed Christian, that she had not abandoned the values and teachings of her Methodist background. Soulmaking could take many forms — so what was strange about what Hillary Clinton was doing? Far from being cult-like or a guru-activity, it was hailed as a type of creativity-enhancingexercise similar to that widely practiced in many sectors of the society today. Across the country generally, there is much curiosity about and interest in spiritual matters, both inside and outside organized religion.

Lifton 1 , his point being that people feeling that their lives are fragmented today are increasingly open to revision and adaptation in their identities and outlook.

This mode of being differs radically from that of the past, and enables us to engage in continuous exploration and personal experiment. I have named it the protean self after Proteus, the Greek sea god of many forms. Is there a new sense of self emerging? The huge baby boom generation followed by Generation Xers are the major carriers of this shift in spiritual sensitivities.

Obviously the culture is widely diffused throughout the society, but it is these younger cohorts that are setting the pace. Throughout much of the Western world, signs point to the rise of a generic spiritual culture, one that is no longer deeply grounded in Christianity and open to the melding of insights from a variety of religious and metaphysical traditions see Roof, Carroll, and Roozen, But here, my comments are limited to the United States.

It was a time of anti-establishment sentiment and countercultural styles when new norms of sexuality, family, and lifestyles confronted older, more conventional religious beliefs, values and practices. These developments helped to erode an older normative culture aligned with a Protestant America and ushered in a malaise that widely affected organized religion: oldline Protestant churches today suffer from aging constituencies and a conspicuous absence of young members.

Roman Catholic and Jewish communities suffer to a lesser extent. Many of the young people who dropped out at the time now know very little — and their Generation X children now in their twenties know even less — about religious teachings except what they have picked up largely from friends, the movies and television.

Many in both generations have turned to Evangelical Protestantism because of its attention to personal needs and firm moral and religious teachings; but many — perhaps most — just dropped out and settled for a privatized form of religion, often with little clarity of belief or genuine commitment. Boundaries that oncedistinguished one religious group from another in the mainstream culture now lack significance to many younger Americans. On top of all this, these generations have grown up in a world where virtually anything can be, and often is, turned into a commodity.

Capitalism has infused religion to a degree perhaps greater than ever before, creating new-style televangelists, selling God for donations, and turning religion into slogans on T-shirts and bumperstickers. And not surprisingly, a generation that experienced Vietnam and learned to question political authorities now questions religious hucksters no less and often approaches religion generally in a posture of skepticism wondering if anything authentic can be found within it.

In this emerging technoculture, they approach religion less as a given reality, and more as an option. As theorists have long said, modernity creates a situation where people are forced to choose what to believe. Moreover, in late twentieth-century, many people look upon cultural symbols -including religious symbols — as humanly constructed, and therefore, if a human creation, subject to negotiation and interpretation.

This perpetuates a degree of uncertainty and relativism while at the same time encourages curiosity and quest. Paradoxically, many young Americans know more about the religions of the world than any generation ever, yet are probably the least sure of what to believe or how to find their way through the cultural and religious maze now encountered in contemporary society.

If as psychologists say this is a time of soul-searching, these people are positioned to experience midlife differently than earlier generations: they have more choices, they are living longer, and they are less rooted in a stable moral and religious culture. Such events force people to ponder the meaning and purpose of their lives. Demography thus takes on some semblance of destiny: throughout the s and well into the first decade of the next century, large numbers of Americans will be passing through these critical self-reflexive years.

More than just a mid-life phenomenon: life generally in late twentieth-century, given all our pluralism in the form of competing worldviews, moralities and values, encourages a high level of reflection. Increasingly we are made aware not just of choices, but of the consequences of our choices. Modernity allows for greater control over life, yet also makes people more aware of the gravity of those decisions; individuals as well as institutions must assume some degree of self-monitoring and responsibility for courses of action Giddings, And that may be a fundamental reason why this is a time of widespread spiritual quests.

Approaching the end of the twentieth-century, people are aware that it has been one of the bloodiest of centuries, remembered for wars, global environmental destruction, AIDS, and the Holocaust, and that increasingly, humanity holds within its own hands its destiny. Viewed in this context, spirituality becomes a search for a meaningful personal narrative amidst the erosion of grand narratives, an exercise that looks both inward and outward in hopes of finding a more holistic vision of life.

Funded by the Lilly Endowment, Inc. These interviews were conducted in four states providing for regional diversity: Massachusetts, California, Ohio, and North Carolina see Roof, , for methodological details. More recently, in a second round of telephone interviews in , we spoke with of the original people. Here summary findings from this panel study are reported in three parts: A involvement in organized religion, B broad spiritual interests, and C spiritual journeys.

Most dropped out in the teenage years, the older ones deeply affected by the Kennedy assassination and the Vietnam War, the younger ones by Watergate and the long gas lines created by the oil embargos of the early seventies. Growing older, getting married, and having children all contributed to their return. Clearly, the generation was deeply fragmented in its value-commitments and religious loyalties despite a high level of religious affiliation. Interestingly, among the earlier dropouts a third of them at the time of the later survey said they were now very active in a religious group.

Less than a third of the returnees in reported now being very active in a religious group, and more than a third said they were hardly ever or never active. For the population we surveyed, it was clear there was little grounding as measured by institutional participation.

But this does not necessarily translate into a simple break between ecclesiastical institution and personal, or privatized spirituality. In the United States religious faith and practice are highly privatized to begin with, which means that the current interest in spirituality finds expression in religious as well as non-religious settings. So complex a pattern makes for a rich, multi-layered religious and spiritual landscape. While atheism itself does not flourish in the American context, agnosticism and uncertainty of belief are fairly common; there is disengagement from institution and external authority, but also a great deal of inward searching and spiritual exploration, both inside and outside of organized religion.

The driving ethos revolves around a passion to embody a faith that is authentic to the experience of postmodern culture, including a desire to be exploratory rather than fixed, holistic rather than overwhelmingly cognitive in approaching religious identity. Appropriators, on the other hand, are motivated by the desire to serve the spiritual, social, and psychological needs of the individual believer.

Examples include the mega-churches of California, distinguished by the impressive range of activities and services they offer: from cafes, child-care provision, book stores, televised transmissions of worship events, and a vast small group network. Resisters are in many ways the most incongruous of the four types.

The latter have infected American culture and are thus a focus for resistance; advocates of this view teach a rational, cerebral Christianity based on the objective, propositional truth of the Bible. This is one of the strongest chapters, not least because it addresses a trend little examined in previous studies, which have often emphasised the charismatic and experience-oriented dimensions of new Christian movements.

Flory and Miller present a detailed exposition of Resister theology, including its interpretation of Biblical passages, and draw connections with current public disputes, such as the debate about intelligent design. 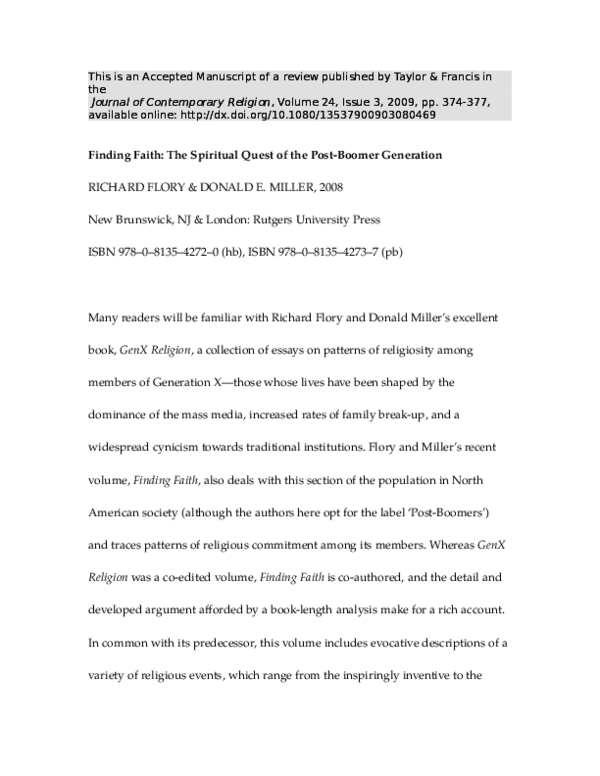 However, there is little attention paid to the collective channels adopted by Resisters in advancing their particular cause. Indeed, evidence of such networks of influence among UK-based evangelicals suggests that their importance extends to the global context. The final category, the Reclaimers, captures those seeking a renewed engagement with Christian history, liturgy, and tradition, which they view as absent from many mainstream—especially evangelical Protestant—churches. On the ground, this amounts to a flow of disenchanted Protestants to Roman Catholic, Orthodox or Episcopal denominations.

Flory and Miller identify as key motivations a desire for order and structure often including submission to priestly authority and for participation in a larger, historically rich Christian tradition, together with an urge to claim a superior spirituality to others, especially those churches that have lost sight of the importance of mystery, sacramentality, and the sacred immutability of Christian doctrine.


Flory and Miller provide an engaging and insightful account of some of the most innovative developments within contemporary Christianity. Their approach is subtle, their commentary is astute, both are historically contextualised and theoretically provocative—maps of the North American religious landscape will have to be adjusted in light of their findings. This is noted, although without any extended discussion, and further engagement with the inherited resources and traditions of the US evangelical movement might have generated a more nuanced analysis. 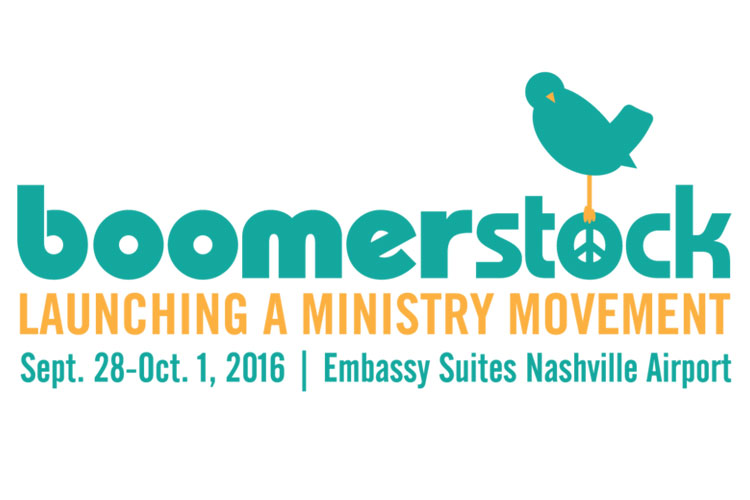 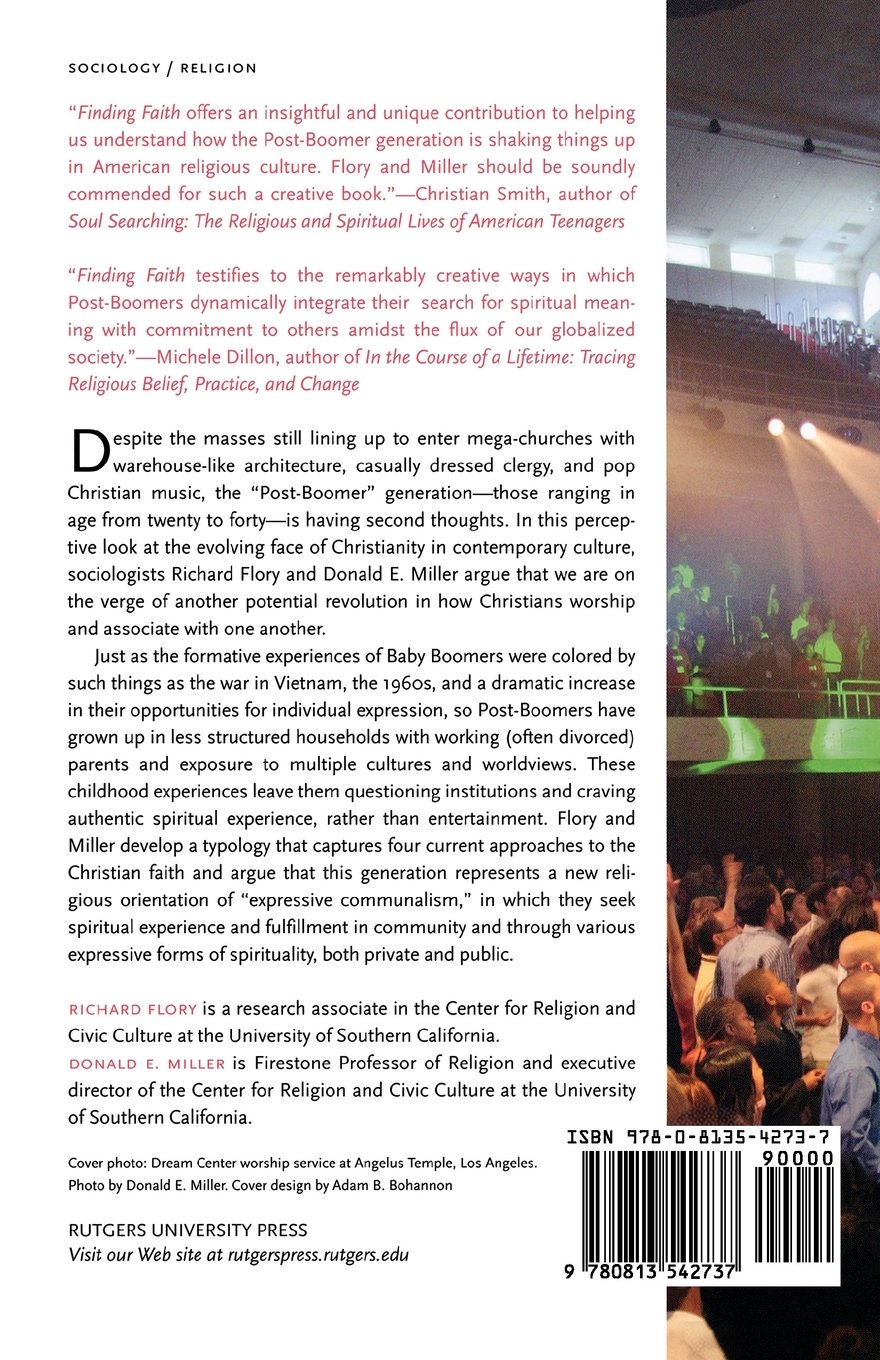 Related Finding Faith: The Spiritual Quest of the Post-Boomer Generation